We have had a great Easter weekend – family and friends, and quiet times together. We are planning some adventures while the boys are on school vacay so I will be taking some time off from the blog – have a wonderful week and see you when school’s back in session!

My latest girl crush and cooking inspiration is Rachel Khoo, star of The Little Paris Kitchen, a show documenting her cooking adventures in a tiny kitchen in the Belleville district of the French capital. The Little Paris Kitchen was also the name of the smallest restaurant in Paris, a table in Rachel’s apartment where she delighted many guests with laid-back food, as she says, “as Parisians cook and eat.”

I recently got her book and have been drooling over the delicious recipes included. and was planning on attempting one when suddenly, our stove died. The oven, to be more precise. We had had problems with the microwave before and since it was all one unit, once the oven died, we decided to replace it.

Here is our old range, a.k.a. Carol Brady:

Two levels, just like Carol’s haircut 😀 dependable, but showing its age. Also, not having to do with Carol Brady at all, but apparently ti was also illegal, since the microwave and stove were too close together, which meant we could never stir a pot of pasta in the back, and there was a gap between the top of the microwave and the bottom of the cabinet, which was built for a modern-sized range and microwave.

Once we took out the range and microwave and slid in the new stove, a.k.a. Rachel Khoo II 😀 a little detail became clear:

When we re-painted the kitchen last year, we decided not to paint behind the range unit because “it’s not like we’re ever going to move it”. Mm-hmm.

Instead of painting, though, we decided on a decorative touch, using something I had seen at Lowe’s and had been wanting to try:

We did not want to cover the entire perimeter of the kitchen with these tiles, but instead, just add a little pop of sparkly goodness (and cover up all that red!). My awesome husband did all the installing, although we will be having an electrician run a new line for the microwave since it uses more wattage than the old one.

I am so looking forward to making recipes from Ms. Khoo’s cookbook on our new range. Easy, affordable, laid-back, no-pressure French cooking? Count me in! And let’s just hope the refrigerator doesn’t decide to kick the bucket any time soon!

When my friend Melissa asked me for a couple of ideas for her craft room, I did that little dance Laura Linney does in Love, Actually when she brings Rodrigo Santoro home from the work holiday party. Obviously, different goals, although I will say that my endeavor had a (ha) happy ending, while poor Laura and Rodrigo only got to make out a little.

The craft room had a row of lower cabinets along one side, an heirloom dresser Melissa wanted to keep, and a nice window to let lots of light in for sewing and other crafts. Melissa wanted to use Behr’s Swan Sea for the walls, which she had leftover from another project, and is ordering a decal as well, so I used those colors to come up with this palette for the room:

She also has a white bookcase, which fit in perfectly with my idea of adding as much white as possible to the room in order to brighten up the muted aqua and wood cabinets. A warm, sunny yellow completes the palette. In the board below, I used stand ins for Melissa’s bookcase and chest of drawers since I could not find the exact items online.

Clockwise from top left: Along with storing craft books, Melissa can use canvas bins for a more uniform look or go the see-through route with mason jars, clear plastic and acrylic bins and organizers for her crafting supplies. I know, from experience how tired your eyes get when sewing or doing other needlecrafts, so I suggested a pendant or task lamp over her sewing machine. The existing white bookcase can be brightened up with paper if Melissa wants a pop of color. A round mirror over the chest of drawers will reflect the light coming in from the window and also break up all the right angles in the room from the bookcase, dresser, window, etc. A brown runner will ground all the wood tones in the room and still stay in the same color palette. Finally, a large piece of pegboard and a kit of various options for hanging items on the board will provide lots of organization and versatility. Melissa has three little ones so maybe she’ll want to hang scissors and pin-holders from the pegboard, and away from curious little hands.

Information for all the items available here.

I met up with my college friend Carina at our usual nail place and I got that pretty shade of warm red. It’s Essie’s Formal Affair and I LOVE it! I had a bunch of dark reds and glittery reds and burgundies, but they’re more of a fall or holiday feel for me, so I wanted a nice, warm tomato red. This one looks like bright red jello and it makes me smile.

I’m also working on my 3rd beret – I tell you, my mom got me re-addicted to crocheting – and this one is made of a rainbow yarn. Unfortunately I think one of my cats ran off with the tag so I don’t have the brand and name right now – boo.

This one was my first beret, modeled by my awesome and very glamorous friend M. 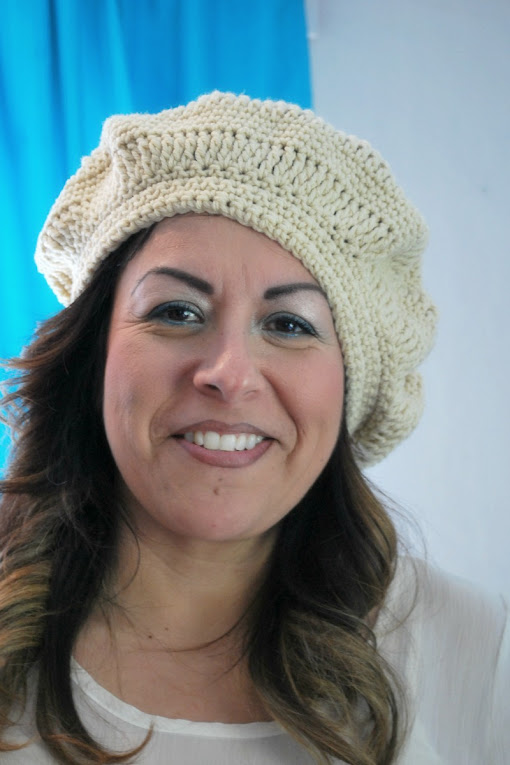 Next Tuesday I will be undergoing laparoscopic surgery – apparently a bunch of cysts have decided to build a condo building on one of my Fallopian tubes. Or the remains anyway, since I had a hysterectomy almost 4 years ago. The doctor does not foresee having to remove my ovaries at this point so I hope that is, indeed, the case. I have a mini stash of yarn to keep me busy as well as a very nice debut novel I will be reviewing on this very blog. I bet you didn’t know I used to be a book reviewer, eh? Mostly romances but also other fiction and biographies. I am almost done with the book and am taking my Kindle with me everywhere so I can read a few pages here and there. Lovely friends and family are helping with school and karate rides for the boys and keeping me company during the first few days.

If you are on Ravelry, I would love to friend you, you can find me here. My days are filled with pre-op appts., finalizing plans to make sure all is taken care of, and prepping some food to have a stash in the freezer. I will try to pop in before Tuesday – but if not, wish me well. See you soon!!!

Yellower green. Or greener yellow. In any case, it’s a color I am in love with right now. So does IKEA, apparently, featuring these shades in a variety of textiles.

We usually have brick/rust and brown colored throws on our sofa but it’s definitely time to lighten up the look. The lovely green throws would look great in my neutral living room, as would the cream one. I also love the cushion covers, although any pillow on my sofa quickly becomes the cats’ favorite spot or weapons for the children. Seriously.

The bird prints are adorable. I’m completing the gallery walls above my corner desk and would love a little groping of these sweet prints.

So, yeah, it’s sounding like a trip to IKEA is in my near future, no?

These last few days have blessed us with glorious weather here in Sili Valley. The sun has been out, but it hasn’t been super hot, I’ve been loving it! This past weekend we decided to hit our local gardening stores – two of them! 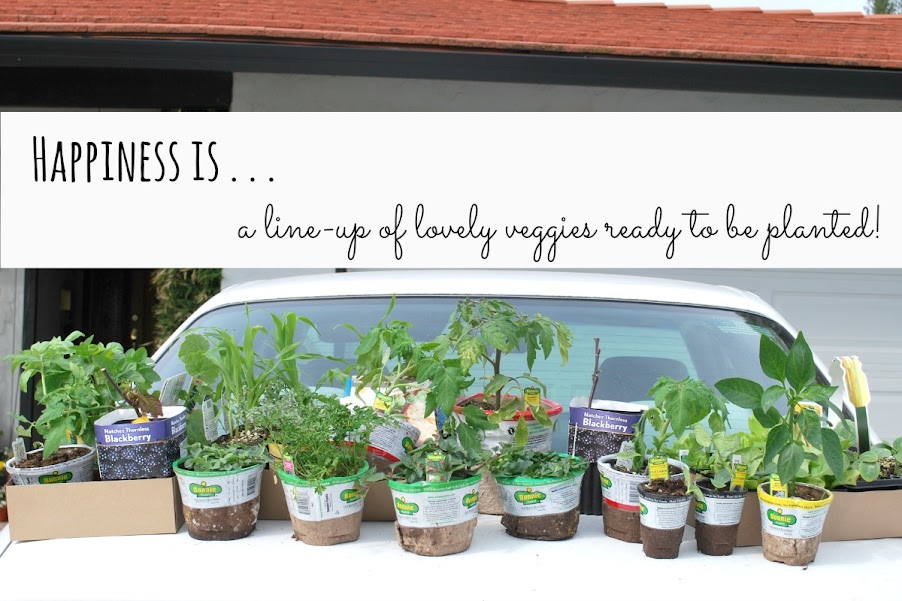 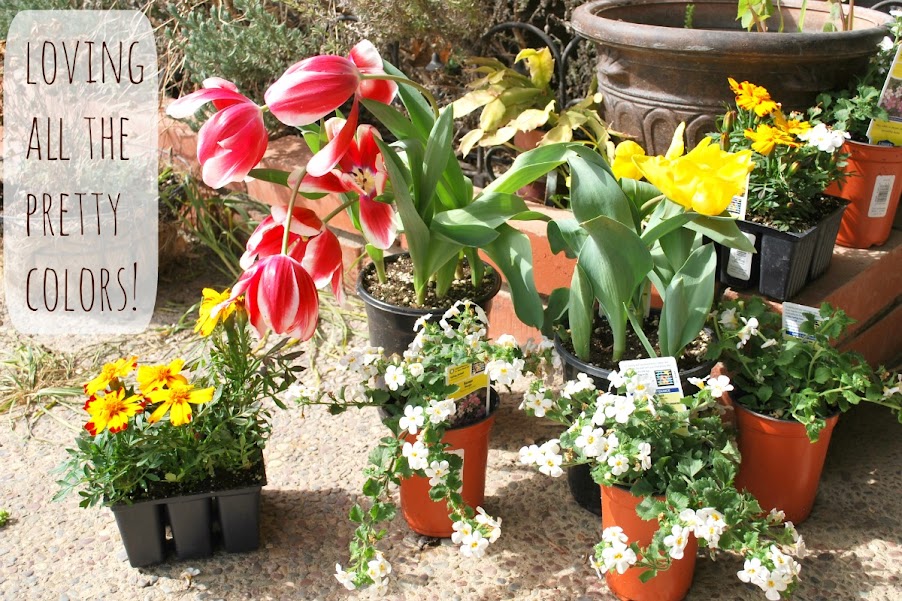 Our front yard got some much-needed brightening up with these trailing white flowers on the hanging baskets:

My youngest was determined to get some yellow goodness ;D

In the backyard, we started our herb garden: 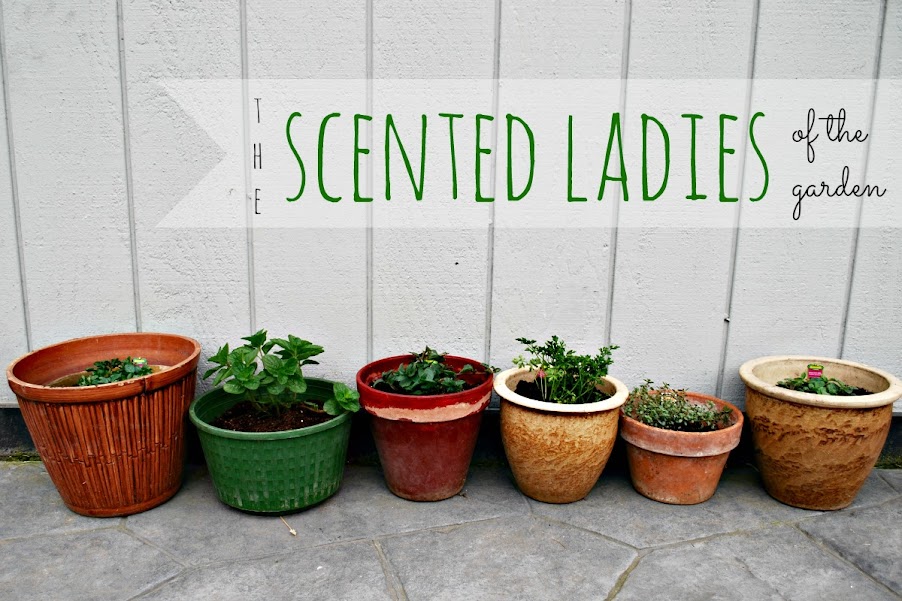 My husband added a brick border to define our salad greens area: 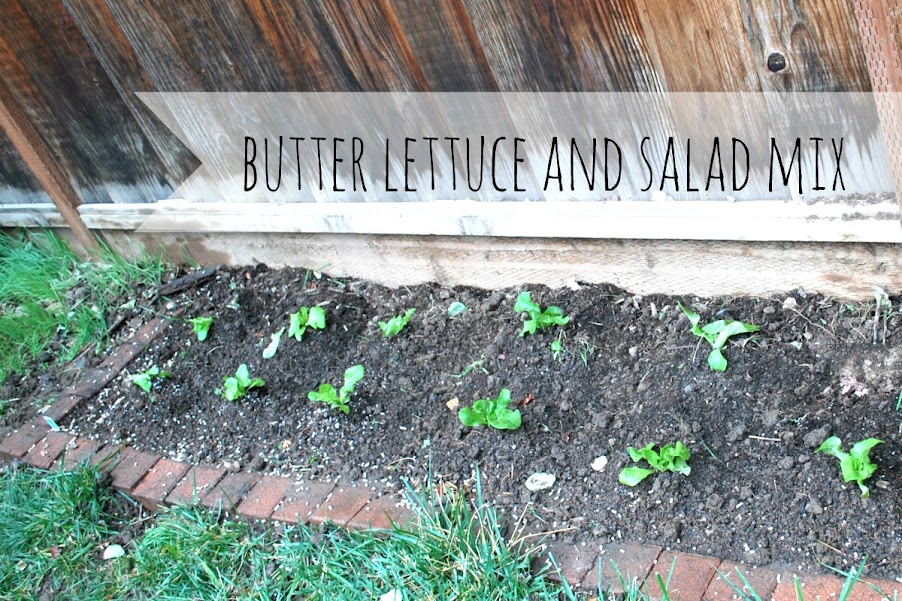 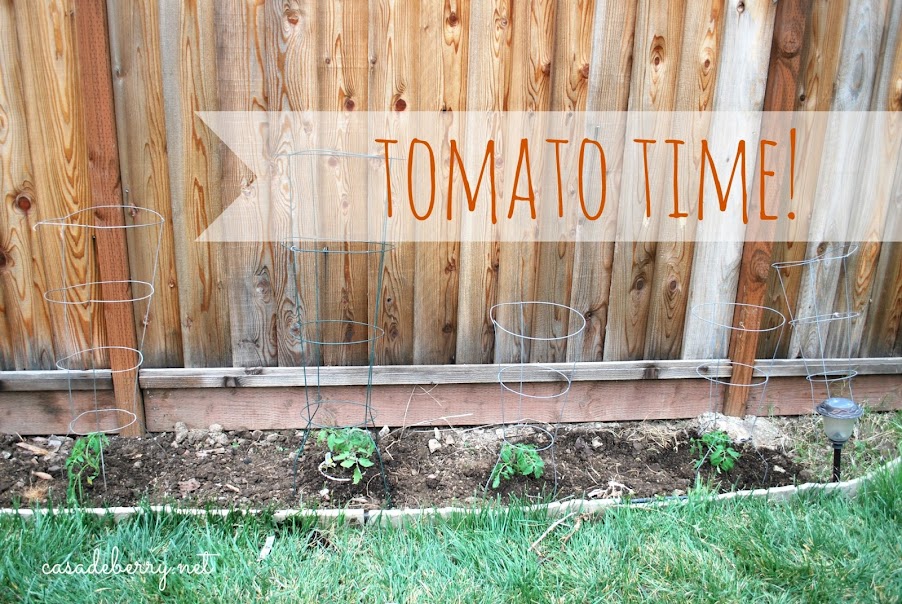 We also planted more potatoes, including some purple varieties. Our potatoes come back every year but we wanted some russets as well, and then we saw the purple sets. Can’t wait to eat some of those! Our onions and chard are doing great, they come back, too, and hopefully our garlic will do well this year. My husband planted two blackberry bushes in the side yard. We have a blueberry bush that is my boys’ favorite treat. Hopefully the vine will do well again this year so we can make some grape jelly again, and I look forward to the lovely scent of my lavender plants.

My husband and I have the sorest hamstrings ever from all the planting and weeding, I’ve been stretching because otherwise the pain doesn’t let me sleep very well. I hope you’ll follow our gardening adventures this year, I’m very excited to see how our veggies do!

So, when I woke up at 6:30am on the morning of my son’s birthday party, I went to the garage and found my husband doing this: 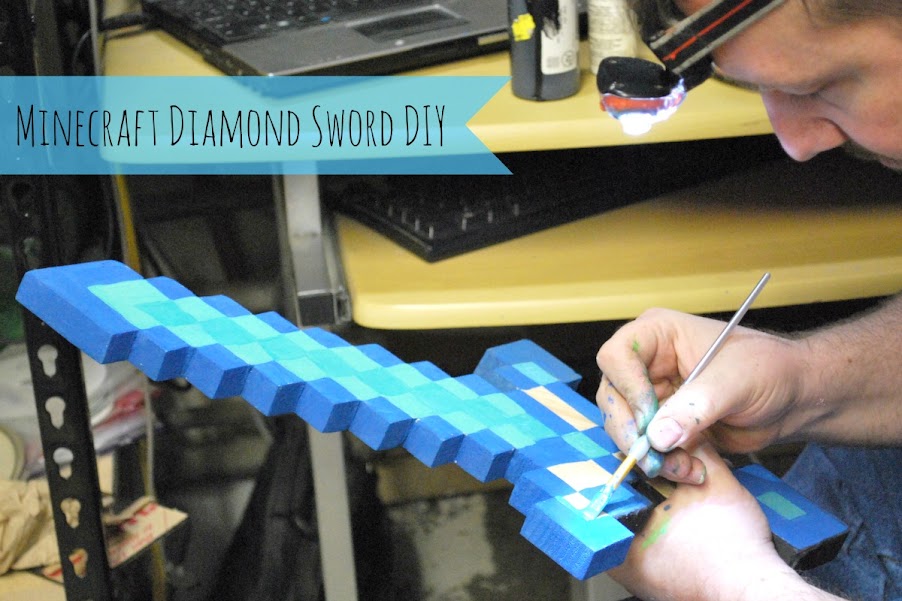 The poor man had spent all night working on the creeper piñata and diamond sword. They looked great, though, so I would say it was worth it. Our boy was very impressed: 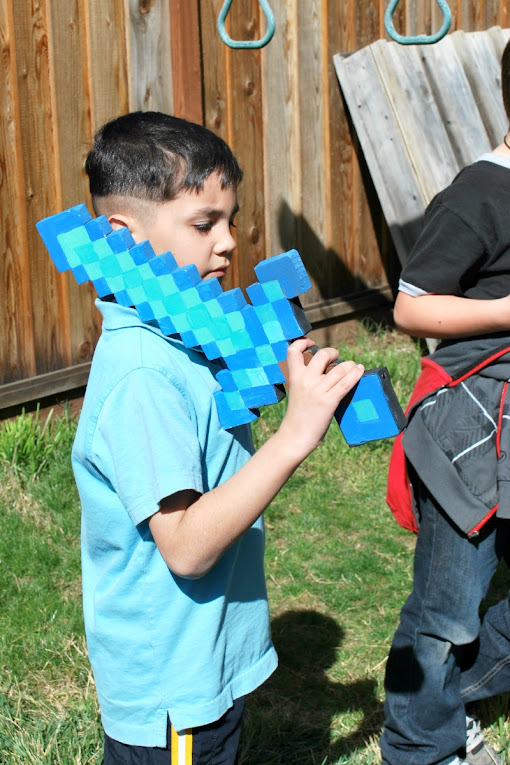 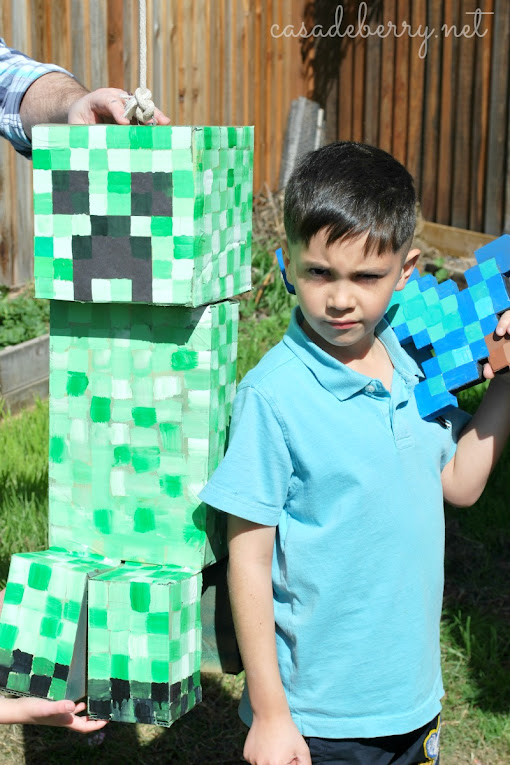 The piñata was made out of cardboard but my husband made it so that the head rotated. All the candy was stuffed into the belly, so it didn’t have a lot of give. The sword is made out of wood and painted in various shades of blue to give it that pixelated look from the game.

After the complete destruction of the poor creeper, we saved the head, as we always try to do, and added it to our growing collection of piñata and costume heads.

And that was our Minecraft-themed birthday party! 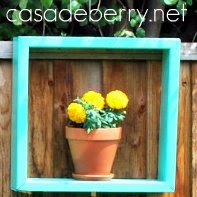