Just as exciting as The Twilight Saga. Not. The acting’s a lot better, though. Because Kristen Stewart . . . okay, I’m not even going to go there.

Someone who lived in this house long ago – two owners ago, I think – was a DIY-er who really should NOT have been DIY-ing it. Floors are not complete, i.e. there is an inch missing from a plank; they installed a microwave on a hole in the wall, when there was a perfectly good microwave in the kitchen 10 feet away; five or six layers of wallpaper in the dining room; an expansion built with no heating or A/C (or permits). Let’s just say that in the past 8 years I have done my share of fist-shaking at this person whose projects have given us so much grief, years later.

One such detail was getting a sunken-in medicine cabinet — and simply attaching it to the wall. I don’t know if you guys can see that it sticks out all the way, instead of just the doors sticking out:

I did not take a before pic. Bad, bad blogger.

My awesome husband decided enough was enough and sunk in the thing, so now it is at it should have been all along. 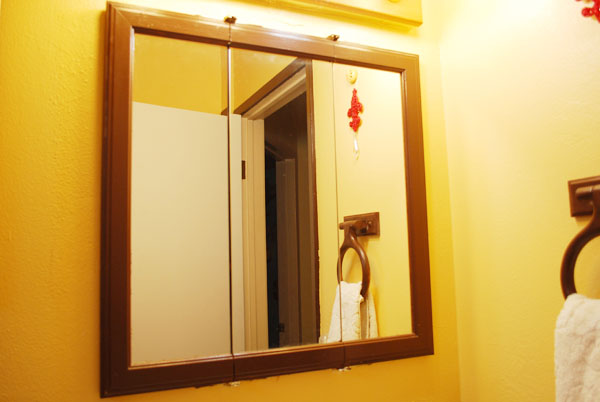 That red thing on the wall is my all time favorite ornament. Ever. In the history of ornaments. Well, except for whatever my kids make. 1) It is red. 2) It is a fleur-de-lis. and 3) It is glittery. It usually hangs above my monitor but now that ornaments are acceptable again, it being late November and all, I decided to put it in the bathroom. Although, it looks lonely. Maybe there are other glittery fleur-de-lis ornaments out there that want a wall-mate.

I am a girl on a mission.

I’ll show you some of our Christmas decorations in the next post ;D