It’s been a while since I posted – life has gotten super busy but also, there was a bit of news I was dreading to share. Our sweet Willie-Boo, our Egyptian Mau, passed away a few weeks ago. We had the pleasure of his company for over a decade, and will always remember him as the most loving kitty we’ve met.

He brought so much joy to our home and is sorely missed. Our other cat, Bernie, also misses his buddy of 11 years, and has become a lot more active in wanting attention and love.

In happier news, I threw a small party for Steve’s 40th birthday – he’s a voracious reader, so the party was book-themed. If you follow me on Instagram, then you got to see various shots of the party prep:

I had Steve create a list of books he wanted to read in case anyone asked what to get him for his birthday. He got a bunch of new books and our friends were kind and generous in other ways as well. It was a fun afternoon with lots of good food and even better conversation.

The boys are almost done with school. Part of me wishes they would bundle all the no-school days at the end so they could be done a couple of weeks early, mostly because of Alexander. Autistic kids, especially, rely on routine, even more than regular kids, and having days off here and there really mess with him and make it harder to go back to school. We have been lucky with a group of teachers and therapists that have worked with us to help Alex get the most he can out of school.

Last weekend we had a wonderful time with Steve’s sweet cousin, she is an amazing riding instructor and was great with both boys, getting them to ride and trot, and do pre- and post- ride work on the horse: 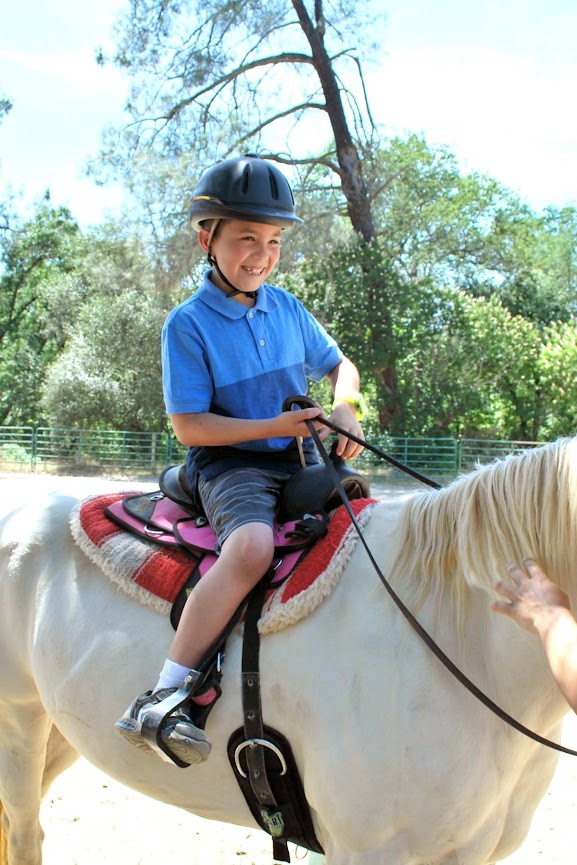 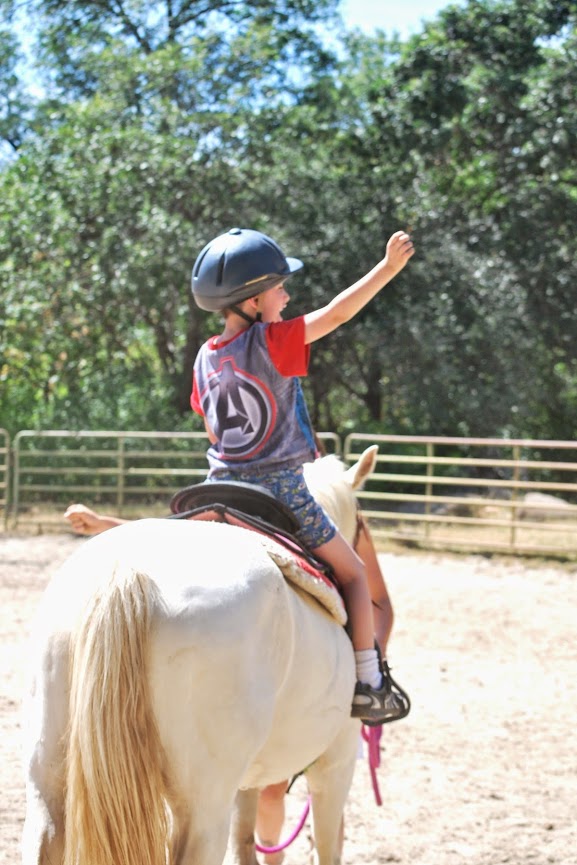 I will be bringing a “virtual swag bag” post next Monday, sharing with you some ideas for cool gift items.

Hope the rest of your week is amazing!

This past week we’ve seen a couple of tiny, maybe month-old, kittens running from our front yard into the side yard. I started leaving out food and Steve and I got worried that with the cold nights, the wee babies might not make it.

Steve ended up setting up the trap and catching the mama cat, who is beautiful, but very, very skinny:

We thought there were three babies, but it turns out there were five. By noon on Sunday we had caught four of them, but the last one proved elusive. We left a thick blanket on top of both the trap and carrier and made the carrier (with the babies inside) face the trap so mama could see her little ones.

Just look at those sweet faces!!! But don’t be fooled, these little ones are totally feral. One of them got Steve’s hand pretty good and one I held kept trying to bite me the whole time. But so damn cute!

I bought wet food and gave mama and babies food and water, which they made disappear right away. I caught the last baby Sunday afternoon and put him with his siblings, where they engaged in all sorts of climbing shenanigans. We put mama in with her little ones so she might nurse now that she’d had food and water. I plan on taking the whole family to the shelter on Monday so they can get check-ups and socialized a bit before they get adopted.

Both our cats, Bernie and Willie-Boo, and our dog Foxy, are rescues, and we plan on getting any future pets from shelters as well. I hope this mama and her babies find good homes, they are all beautiful so I am sure they will be adopted soon!

I’ve posted before about our cat Willie-Boo. This pic, probably the best of him, was taken by a friend during a birthday gathering.

So imagine my surprise when I read on one of my favorite blogs that the blogger’s kitty had also lost an eye. Even more surprised because Nicolas, the kitty, looks just like Willie-Boo!

I am glad Nicolas is recovering from his surgery. If Willie-Boo is anything to go by, Nicolas will be just fine. Willie has no problems with depth perception or anything else. He is getting on in years, but his missing eye has not made a difference in his quality of life.

So, best kitty wishes to Nicolas – Willie-Boo and Bernie send lots of happy meows your way!

After I posted about my Egyptian Mau, I was asked in a comment how Willie-Boo had come to lose his eye.

When we adopted him, we were told by the shelter staff that they had found him with one eye in such bad condition that the only recourse was to take it out. He had, apparently, been in a fight, and the eye was pretty much hanging out. Poor guy. Willie was definitely someone’s lap cat who ended up getting lost or was abandoned or something, because he is the most loving, cuddly cat ever. The shelter doctors did the appropriate surgery and he has no problem getting around with just one eye. He jumps on and off tables and sofas with no problem, and as I said in my last post, he RULES Bernie. They get along really well but just like my human kids, they love to play and fight sometimes. But they are each other’s BFF and companion.

At this point, Bernie is 11 and Willie somewhere around 10 years old.

One more thing – I am terribly allergic to Willie! True. I had never any problem with Bernie, but the night Willie came home with us I had to go back on inhalers. Call me crazy, but I chose to take my medication instead of taking him back. I am allergic to some cats and dogs; for example, I can’t be in my mother-in-law’s house or in my friend Kathie’s house for more than ten minutes without having a major allergy attack. What does that mean? I start having difficulty breathing – I can feel my lungs getting heavy inside my chest – coughing starts soon after, and at that point even if I take my emergency inhaler the only solution is to remove myself from the place or I would die from being unable to breathe. And this is why we now host Thanksgiving and Christmas 😀 My husband’s parents used to host but I just couldn’t make it through the entire thing.

If you have any further questions, just let me know! ;D

A couple of years after I got my first cat, Bernie, my then-boyfriend and I decided to get another cat. To put it mildly, Bernie wanted some company. He’d stand outside our bedroom door all night, meowing as loudly as he could because he was lonely. This is when we started to use earplugs.

I browsed through our local shelter’s website and found an adorable kitty, about 18 months old or so, named Jake. The one thing that stood out, so to speak, was that Jake only had one eye. He was described as loving and cuddly, but when I called the shelter they told me no one wanted to adopt him because he was missing an eye.

What??? Honestly, I’d rather take a sweet kitty missing an eye than a two-eyed cat that is mean or aloof. He came home with us a couple of days later and has been the most loving and snuggly cat I have ever met.

This is our new kitty the night he came home with us. We gave him a new name – Willie (point if you get the reference), or as I call him, Willie Boo.

He rules the house, or rather, he rules Bernie, who is bigger but definitely not braver. He greets all our visitors with a quick sniff and then plops on the floor so he can be petted.

He is also very good at being comfortable 😀

Recently, we had some animal show in the background and they began talking about the Egyptian Mau – Mau being the Egyptian word for Cat. Turns out our little Willie-Boo here belongs to a race over 3,000 years old, celebrated in artwork and worshiped by pharaohs. Then we found out that our friends’ cat is also an Egyptian Mau, signaled by the extra flap of skin under their bellies, an M marking on their forehead and a bird-like vocalization. Willie has chirped for years without us knowing it was a clue to his prestigious lineage.

On the downside, Willie is a licker with a sandpapery tongue, so if you come by, please don’t let him lick you for too long. My husband took a nap while Willie was licking his arm and woke up to dots of blood where his skin had worn off – yikes!

Here’s a really good shot of Willie that our friend took a few days ago:

Some of my favorite costumes, all made by Steve for the boys.
99% that witch. (Have to finish the sleeves).
Thank you @pinkfoxwoodshop for gifting me these awesome markers!!!